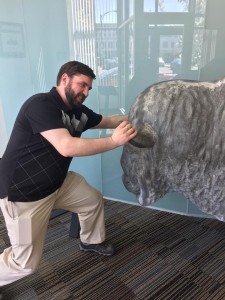 Please join us in welcoming Nicholas Hardenburg to the CFBT family!  Nicholas joins us from Flower City Printing in Rochester.

As an IT/Docuware Specialist, Nicholas hopes to become the “Ryan of Rochester,” or a “Documancer” as he prefers to be called.

In addition to working for Flower City Printing, Nicholas has also worked as an audio engineer, and worked for a video game company making Guitar Hero, and sound-FX for games int eh Transformers and Marvel comic universe.

Outside of CFBT, Nicholas is a youth soccer coach, and a Cubmaster for East Rochester Pack 67 Cubscounts.  He enjoys cooking, home brewing, and winemaking.  He is also semi-fluent in German, after living there as an exchange student his senior year of high school.

He lives in Penfield, NY with his wife Audrey, and his two children, Benjamin (9) and Juliet (8).